The word typhoon (violent storm, whirlwind, tornado), comes from the Greek typhon [whirlwind; Gr: τυφών], personified as a giant, father of the winds, perhaps from typhein "to smoke" (origin of the word typhus).

The word dime (coin worth one tenth of a US dollar, a 10 cent coin) comes from the old French disme (a tenth part), from the Latin decima [tenth (part)], from decem (ten), related to the Greek deca (ten).
See also "etymology of dean" here . 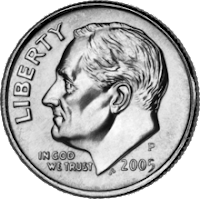 The word December comes from the Latin December (tenth month of the old Roman calendar, which began with March), from decem (ten), related to the Greek deca [ten; Gr: δέκα].

Dean comes from the old French deien, from the Latin decanus "head of a group of 10 monks in a monastery", from earlier secular meaning "commander of 10 soldiers" (which was extended to civil administrators in the late empire), a transliteration of the Greek decanos [Gr: δεκανός], from deca "ten". College sense is from 1570s.
.